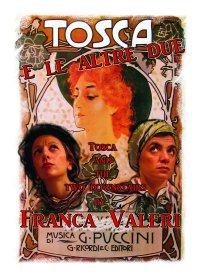 The hat of Ms. Mondelli is made by Monvieve

Play-within-an-Opera is U.S. debut for one of the most influential and important contemporary Italian women playwrights.

Tosca and the two downstairs Promo

“Tosca” by Puccini is based on a drama by Sardou. In this well-known opera, Mario Cavarodossi, a painter who has concealed a dangerous political prisoner, is being protected by his lover, a celebrated singer named Tosca.  Cavarodossi is tortured to reveal the whereabouts of the prisoner to Scarpia, the chief of police, who has promised to save the painter by a mock execution if Tosca will give herself to him.  She ultimately agrees, but stabs Scarpia at the last moment.  The execution is, however, a real one and in grief, Tosca leaps from a battlement to her death.  2010 was the 110th anniversary of the opera, which debuted on January 14, 1900.

“Tosca e le altre due“ by Franca Valeri shares the 19th century setting and events of the opera, but refracts them through two memorable women characters who share them from the outside. The torture’s screams and scuffles are overheard from upstairs by the wife of the torturer and the female doorkeeper of Palazzo Farnese in Rome, where the interrogation is taking place.  The play is a wry and humorous character study of these two women, outsiders, who are accidentally close to the passions and politics of the story.

In the play, the doorkeeper’s lodge of the Palazzo Farnese is dominated by Emilia, a proud Roman woman who is responsible for upholding both the house’s decorum and the reputation of the powerful and wicked Baron Scarpia.  She is married to Nando, the jailer of the Castel Sant’Angelo; a strong housewife who doesn’t get easily upset over the constant shouting and somewhat shady affairs of the Palazzo.  The politics of Rome in 1800 are important to keep in mind. Napoleon having invaded Italy, power was shifting between the old royalists (who employ Scarpia) and the young Italian revolutionaries (like Cavaradossi), who wanted Italy to become a republic along French lines.  Emilia passionately supports anything Baron Scarpia must do to wield his authority.

One night, a woman named Iride sneaks into the porter’s lodge. She is an actress and former prostitute from outside Milan who has come to pick up her husband, Sciarrone, the galley-sergeant and sadistic factotum of Scarpia.  Sciarrone is working late at a very delicate job on the upper floor of Palazzo Farnese: he is forcefully interrogating a variety of prisoners, among whom is Cavaradossi, Tosca’s lover.  His techniques are cruel, but Scarpia knows that Sciarrone’s methods, when applied to Cavaradossi, may be an efficient way to shock poor Tosca, whom he desires, into surrendering her body to him.

Emilia and Iride patiently wait for the end of Sciarrone’s shift.  With the prisoners’ tortured screams in the background, the two women keep each other company.  Scattered through their dialogue are inserts of the actual opera performance. In the course of the play, all the characters in “Tosca”–including Scarpia, Spoletta, Roberti and Cavaradossi–pass by and are commented on by the two women, whose conversations are a hilarious parody of common people’s life.  Their gossip reveals the miserable daily struggles of the poor but ugly, who must dwell among state secrets that are much larger than they are.  The situation peels away to reveal a desperate women’s plot.  Iride is not there just to wait for her thuggish husband, but to escape from him.  A dangerous plan is born free her.

Divided almost like the three acts of Tosca, “Tosca and the two downstairs” moves between two Roman settings,the church Sant’Andrea della Valle and the Palazzo Farnese. It starts out deceptively satirical, comical and light, then enlarges into a very profound analysis of its two characters.  Emilia, although stern, conservative and protective of her position in the status quo, is revealed to be empathetic to a fault and willing to risk her life to help anyone. Iride, who had escaped a life with no “moral” pretensions, would now rather return to the streets than endure her violent, cruel husband.

The play had its debut on 1978 in Italy with Franca Valeri as Emilia and Adriana Asti as Iride. In the U.S., the play has been presented by KIT-Kairos Italy Theater in the form of a reading at Casa Italiana Zerilli-Marimo’ at NYU and at the Ciao Italy Festival in Brooklyn.

“Tosca and The Two Downstairs” is the first play by Franca Valeri to be produced in the U.S. Born in Milan in 1920, she is the first female comic actress and satiric playwright to enjoy steady success from the 1950s to today. Her unforgettable women characters–above all the “Signorina Snob,” the satirical portrait of a rich girl from Milan–made her very popular in the 50s. During a career that now, despite the age, shows no signs of slowing down, Ms. Valeri has worked in about 53 films with the most famous Italian directors and actors such as Alberto Sordi, Vittorio De Sica, Toto’, Dino Risi among many others. In addition, she has written several screenplays and plays. Ms. Valeri is also an opera connoisseur who has directed several operas and founded a competition for young opera singers. In 2014, she keeps working and writing. She is now 93 year-old.

THE US PREMIERE OF “TOSCA E LE ALTRE DUE” (TOSCA AND THE TWO DOWNSTAIRS) BY FRANCA VALERI, WAS PERFORMED ON FEBRUARY 2010 BY KAIROS ITALY THEATER AT THE CELL IN CHELSEA.

The most learned woman