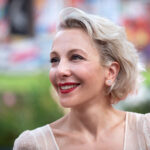 Marta graduated in Ancient History, Magna Cum Laude, from the University of Bologna and in acting from the European Theatre School of Bologna “Galante Garrone”. In Italy, she acted in theater and movies next to Giovanna Mezzogiorno and Adriano Giannini (in the film Stai Con Me, directed by Livia Giampalmo), Sara D’Amario (in the film La Maschera d’Acqua directed by Leonardo Ferrantini), Mariangela Melato (in the film Vieni Via Con Me, directed by Carlo Ventura). In New York she studied acting with Susan Batson and works in theater and movies (among her credits the short film Crossing, directed by Riccardo Costa, with Anthony Mackie and The Groomsmen, directed by Ed Burns with Brittany Murphy). With the company Kairos Italy Theater she has performed one act plays in Italian and English by Italian authors such as Edoardo DeFilippo and Ennio Flaiano and the two-character play by Franca Valeri Tosca And The Two Downstairs.

Marta has also been freelancing as a journalist since 2006 in Italian and in English (she writes for the The Huffington Post). The first movie she wrote and directed, the feature film The Contenders won the Aloha Accolade Award for Excellence in Filmmaking at the Honolulu Film Festival 2010. Her second screenplay, A Small Accident, got an honorable mention at the Table Read My Screenplay at the Sundance Film Festival 2011 and it is in development. Her first novel, Occhi di Cane, Cuore di Cervo was published in Italy earlier this year. www.martamondelli.com