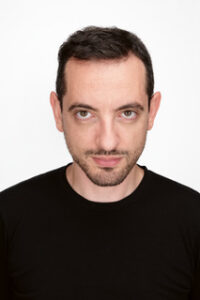 Mario Merone (an Italian actor, director, playwright and drama teacher).  He is graduated in Acting at Silvio d’Amico National Academy of Dramatic Arts in Rome and has a Master in Drama at University of Bologna. He has performed and directed many plays across the Europe including Romeo and Juliet, Schindler’s list, The Wizard of Oz, Miles Gloriosus, A Midsummer night. Mario moved to New York in 2014. He is part of KIT (the most important Italian theater company in New York) and he performed as a leading role in Six characters in search of a country during the PEN international theater festival and in the theatre series“ On the Italian stage”. Mario is part of the show The Amazing Max written, directed and interpreted by Max Darwin, one of the most sought after “American” magic artist “, who has worked among others with Uma Thurman. He also debuted in New York in the film Bloody river by Giuseppe Santochirico, interpreted among others by Nicola Acunzo, in the role of a boy who dares to tackle a boss of the underworld. He performed in two plays (Going up and BUDFUD129ZK) for the Future is Female Festival at The Goddard Riverside Bernie Wohl Center in New York. He worked at Castillo theatre as Producer (The proverbial Loons), as Assistant Producer and Sound Operator (The Donut Play and Still on the Corner). He worked as stage manager in Lured (World premiere) written by Frank J. Avella and directed by Rod Kaats at Theatre for the New CIty in New York and in The worth of women (World premiere) by Moderata Fonte directed by Jay Stern and Laura Caparrotti at  the Access Theatre in New York. Currently, he is working as an Activity Specialist at the Jerome Avenue Men’s Shelter in the Bronx, a 200-bed shelter for men experiencing homelessness and living with mental health and/or substance use issues. He fosters a creative space for clients to explore their emotions, creativity, and thoughts in an informal setting. He works as a drama instructor for The Actor’s Fund- Schermerhorn Recreational Program in Brooklyn with formerly homeless individuals with special needs, including individuals living with HIV/AIDS and low-income community residents the majority of them still pursuing careers in the performing arts.