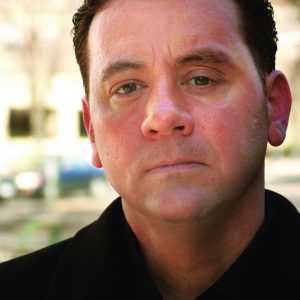 Dave Johnson is the author of the play, Baptized To The Bone (Dramatists Play Service) and Marble Shoot, a book of poems (Hummingbird Press/Wake Forest University). A production of Baptized To The Bone enjoyed a run of sold-out performances through May 3, 2009 at the New Conservatory Theatre in San Francisco. The play also received awards of best actor and best new play from the Dallas/Fort Worth Critics Forum for the production at The Water Tower Theatre in Dallas. Dave was critically acclaimed as an actor as well, by The New York Times, for his role in Romulus Linney’s play, True Crimes (1996), and by The Village Voice (1997) for his role in Linney’s Mock Trial. Dave appeared as a featured poet on CNN International News and was presented as guest artist for The Manhattan Borough President’s inauguration 2006 at the Metropolitan Museum of Art. His newest works include a CD recording of original poems, Dead Heat (Champion Records) and a co-translation of the stage-play, Gomorrah. He teaches writing at Yale University and The Cooper Union. Dave is currently a visiting Faculty Member of the MFA writing program at The New School.