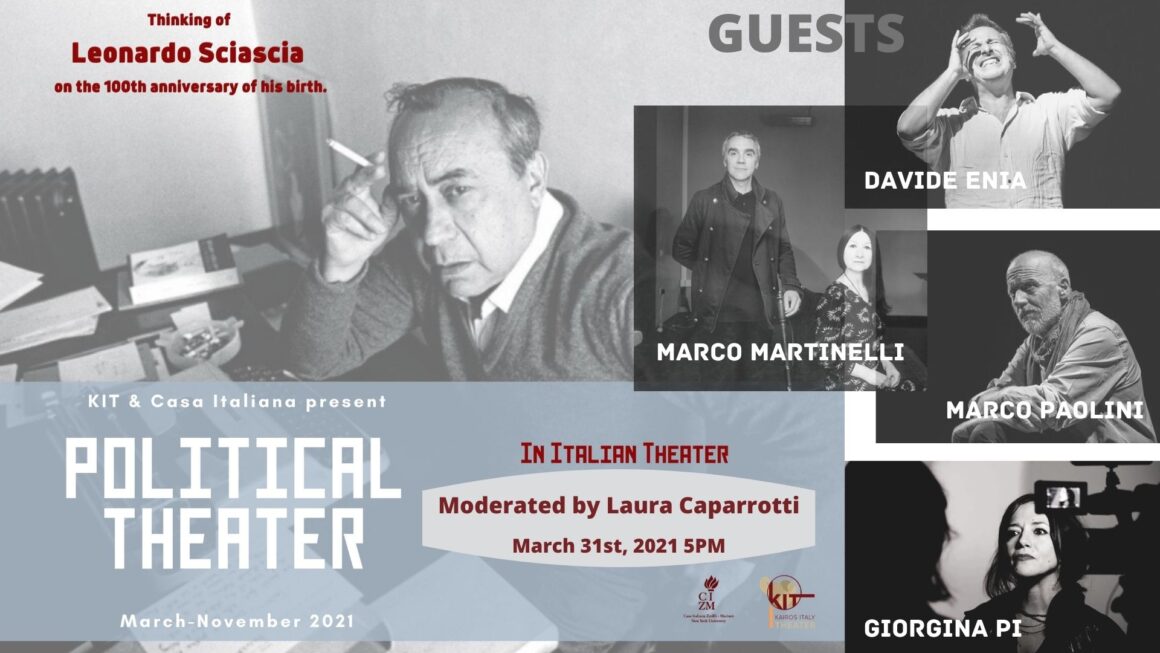 After a brief introductory remarks on the history of Political theater in Italy, Laura Caparrotti (KIT) talks with some of today’s Italian theater makers focused on bringing social and political issues on stage. Guests of the event are:

Davide Enia was born in 1974 in Palermo, Italy. He has written, directed, and performed in plays for the stage and for radio. Enia has been honored with the Ubu Prize, the Tondelli Award, and the ETI Award, Italy’s three most prestigious theater prizes. He lives and cooks in Rome.

Marco Martinelli (Teatro delle Albe), playwright and director, founded the Teatro delle Albe (1983) with Ermanna Montanari, it has become one of the most respected contemporary Italian theatre companies. Martinelli has been awarded numerous prizes including: five Ubu Prizes; the Drammaturgia In/Finita Prize; the Hystrio Prize; the Golden Laurel-international Festival Mess; and the Prize for Career Achievement- international festival Journées théâtrales de Carthage. His texts have been published and staged in Italy, France (selected by the European projects on contemporary playwriting Face à Face and Fabulamundi), Belgium, Germany, Romania, Slovakia, Chile, Brazil and the United States (translated in English by Thomas Simpson).

Marco Paolini is an Italian stage actor, theatre director, dramaturge and author. In the 1970s, he moved to Treviso and started working in theatre. Paolini”s repertory includes civil theatre. His performances usually consist of monologues with frequent use of the Venetian language, irony and satire. Inspired by Dario Fo, he is an Italian exponent of narrative theatre. Until 1994, Paolini worked with various theatre groups, including Teatro degli Stracci, Studio 900 of Treviso, Tag Teatro of Mestre in Venice and Laboratorio Teatro Settimo. In 1995, received the Ubu Prize for writing Il racconto del Vajont (translated: The Vajont Tale), which was dedicated to the disaster of the Vajont Dam in Italy. The ceremony aired on Rai 2 Italian television Since 1999, he has produced his own works with his company JoleFilm.

Giorgina P is an artist born and raised in Rome where she took a degree in Arts, music and entertainment. She specialized in Paris with a thesis on the Shakespearian performances at the Théâtre du Soleil. She is the author of several essays and papers. As a PhD student in Comparative studies at the Universities of L’Aquila and Paris 8 she is currently concentrating on contemporary rewritings of Greek myths signed by women. She is a stage director, an activist, a videomaker, a feminist and a member of the Angelo Mai artistic collective – an independent space available to artistic activities in Rome (it obtained the Franco Quadri award in 2016). With the Bluemotion theatre group she stages shows and designs settings, carrying out a research which unites stage arts, visual research and live music. In recent years she has co-curated “Not ordinary, not safe” a project on the texts of the great playwright Caryl Churchill from which were born shows and radio dramas. She is the first in Italy to stage the texts of the revolutionary artist Kae Tempest.