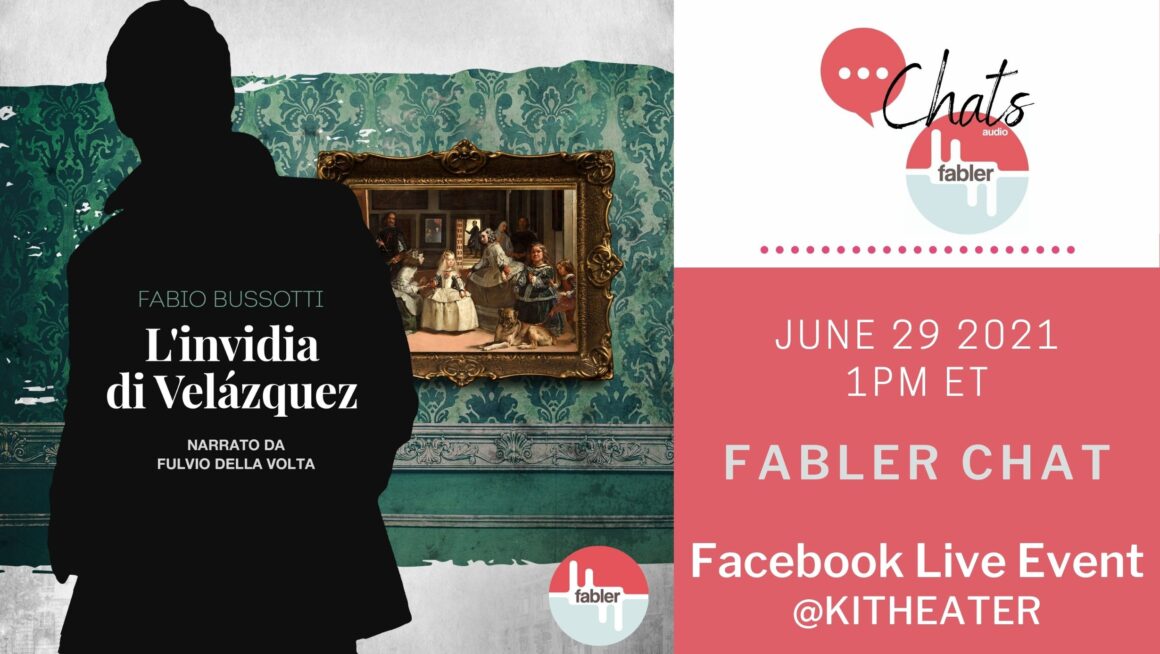 A Fabler Chat with  “L’invidia di Velázquez” author Fabio Bussotti, narrator Fulvio della Volta, Fabler director Carlotta Brentan and Mincione Edizioni founder Mariangela Mincione. Moderated by Laura Caparrotti. In English and Italian.
Now available as an audiobook – the first volume of the adventures of Commissario Flavio Bertone.
A thriller that features Velázquez, Picasso, Foucault, and an intriguing Art History expert in Madrid.
The Rome police commissioner Flavio Bertone investigates the murder of a college professor. All clues suggest that the killer is the actor Diego Ribonskij, the professor’s lover. But Bertone is not convinced, and facing the ire of his superiors he launches his own personal investigation that will lead him around Spain, grappling with a mystery rooted in Velázquez’s enigmatic painting, Las Meninas. But as Bertone goes further down the rabbit hole, the murders continue… with no guarantee that the good guys will win out in the end.
Copyright audiolibro © 2021 Fabler Audio
Fabio Bussotti (author) is an actor, playwright, screenwriter, author and translator of novels from English to Italian. A theater and cinema actor, he graduated from the Bottega Teatrale of Florence in 1984. On stage, he worked with directors including Adolfo Celi, Alvaro Piccardi, Ermanno Olmi and many others. On screen, with Liliana Calvani, Federico Fellini, Luigi Faccini, Maurizio Zaccaro, Mario Monicelli among many other directors. In 1989 he won the Nastro d’Argento award for best supporting actor in the feature film Francesco directed by Liliana Cavani. He studied with Vittorio Gassman and worked in theater with Alessandro Gassman, as well as playing a leading role in the TV series “Dottor Clown.” His first novel, L’invidia di Velázquez, was published in 2008 – a thriller featuring the Rome police official Commissario Flavio Bertone. Bertone’s adventures continue with Il cameriere di Borges (2012, re-published in 2017 by Mincione Edizioni), Le lacrime di Borromini (2015), Al cuore di Beckett (2016) and San Francesco a Central Park (2017), all published by Mincione Edizioni.
Fulvio della Volta (narrator) is an Italian actor and producer living in NYC. He earned a Masters Degree in Communication & Media Studies from La Sapienza University in Rome in 2005, and graduated from the William Esper Studio Two Year Conservatory Program in New York in 2009.

Post-graduation, he continued to work closely with Bill Esper on the Meisner Technique in his invitation-only Master Class. In 2007 Fulvio founded his production company Parallel Differences Productions, and he became a member of SAG-AFTRA in 2011.

Fulvio also works as an on-set Italian dialect coach, most recently on the network TV shows “The Blacklist” and “Billions” His favorite quote is: “Find your strength in your vulnerability; but don’t take yourself too seriously.”